It’s not a funny story

When DD was almost two a new kid named Stevie started in her class. DD loved Stevie. When she saw him she reached out, almost touched his skin, then yanked her hand back. She thought his skin was hot because it was black.

Her teacher told us about it and we laughed. Stevie’s mom, me, the teacher, the other moms. Everyone.

And DD and Stevie went about their business, fast friends in the toddler room.

I don’t know how long it took me to realize that Stevie’s hot skin wasn’t really funny.

Stevie was the only black person my daughter knew. She was almost two and knew no black people. 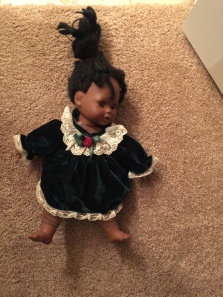 Not long after that DD ended up with her black dolly, Miss Sally. She named Miss Sally because her teacher had brown skin and the doll reminded DD of her teacher. DD loved that doll. I still have Miss Sally even though DD is 26 now. But other than Stevie, DD didn’t really have black people in her life until she started elementary school.

The second year of DD’s elementary school life she was labeled the bad kid. I was a young mom, a dumb mom, and I let that happen, but I knew enough to go up to the school. She wasn’t bad. She was bored because she was in first grade and they were doing math on a chalk board and she’d read all the books in the teacher’s library. The other little boys sitting on the “bad kid” wall with her weren’t bad either. They were rambunctious. And they were black. The rambunctious little white boys were precocious and precious. Bored, hyper girl=bad. Black boy=bad. I was outraged but silent. It was the only blatant racism I saw in DD’s school career, but it stayed with me.

And still, DD did not have black people in her life. Not really. That wasn’t until later. Much later.

It wasn’t intentional, but in my separation, in my homogenized existence of whiteness, I contributed to this world we live in today where people of color feel less than.

Now I’m listening to the aftermath of  what was supposed to be a peaceful protest where shots have been fired and up to 10 police officers are down. CNN just said three are dead.