This is Why I Love Netflix

Foreign films aren’t going to make their way to Wichita Falls, but with Netflix, I have them at my disposal. I’m so glad. Nowhere in Africa won an Academy Award in 02, but I don’t remember people talking about it the way they did Life is Beautiful or Il Postino. 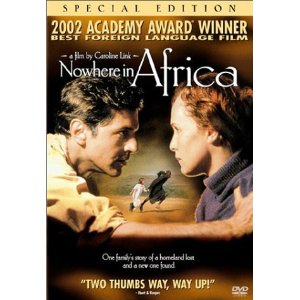 The movie is set in Kenya and instead of being one person’s coming of age story, it’s an entire family’s story of change, resilience, love, hurt, acceptance, strength. It’s a story about the Jews in World War II but somehow that’s almost secondary. It’s a study in feminism, but I don’t think that’s intentional. It’s a tolerance film without ever becoming preachy. If you have Netflix, I highly recommend the movie. It’s one I’ll never forget.

Way back when I first started buying romance (not reading, I’d been reading romance for years!) I bought my books from waldenbooks in the mall. I loved Julie gar wood and the booksellers would call me to let me know a new gar wood was out and they led me to johanna Lindsey and others because of my love for Garwood. I spent my paychecks at walden’s on a regular basis. Flash forward 20 years. Today I buy mostly e-books. I miss walden’s but I can’t stand shopping at the local big bookstore. They neve have what I want and e kids working there don’t know what they’re talking about. Today I discovered the best thing ever: bordersblog.com. Sue Grimshaw is just like the Walden’s booksellers from 20 years ago. She talks about books, there are lists of monthly releases. I can’t believe I didn’t know about this resource! Looking forward to a great year of reading!