Happy New Year! Usually I resolve not to make resolutions, but I’m mixing things up this year. 🙂
Back when I made resolutions I always topped mine with 1. to lose weight.
I’m changing that this year. Instead I resolve to get healthy. I was well on my way to that goal this summer, but I let school get in the way. School’s my job, and I love it, but I can’t let it hurt my life. So this year I resolve to go to the Y five times a week, to do card 3 of those times and weights twice.
2. I resolve to make time for my family.
I went to see my brother for the first time this year. Usually he comes to see us. I resolve to make it out to Georgia at least once a year. AND several of my uncles live in Dallas. I resolve to touch base with them more often. Grandma and Grandpa died this year. If we’re going to be close at all, it’s going to take effort. I resolve to work on that.
3. Write.
I started three books last year and finished none. It was a weird writing year for me. I didn’t really commit and I even pushed the writing aside throughout the year. I love writing. It’s part of who I am. I let myself get caught up in “what I want to write” and spent a lot of time thinking and rethinking that. This year, I’m just writing, and I’m finishing what I start.
4. Submit.
It’s all fine and good to write. You’ve got to get that writing out to the people that can buy the work. I’ve targeted Harlequin/Silhouette for year without really trying any other markets. I’m going to change that this year. If something comes back rejected, it’s going back out into the big bad world.
5. PLAN.
It’s easy to get into a rut at school because I’m doing pretty much what I’ve done for 15 yers. I’m going to wrok on planning more and developing new lessons.
6. Pictures.
I’m a yearbook teacher. I’m going to take photos this year!
7. Finally, Positive.
I let myself get way down this year. It was so bad I couldn’t talk about work without coming close to crying. I love my job. I love my life. But I let the hormones and a few outside forces drag me down this year. I did it consciously. Some people don’t have to wrooy about that. I’m not one of them. So this year, I’m going to keep The Secret and The Success Principles nearby. A friend told me this and it’s true you don’t have to let anyone put their mad, sad, bad on you.

For a long time I’ve kicked off Christmas by watching midnight mass from the Vatican. I’m not Catholic, but I love the pageantry and sacred feeling of the event. When I actually got to see the Pope in Rome in ’08, I realized all Christians should go to the Vatican to just feel the emotions of the place. It feels the same way Notre Dame and the baptistry at Pisa feel. You know how there are places where you HAVE to whisper because you just know it’s the right thing to do? That’s the Vatican.
(Two hours after the Pope blessed the crowd I was in, I fell and shattered my ankle and got stuck for eight days in a Roman public hospital. If he hadn’t blessed my group, I probably would have broken my neck and died!)

This Christmas was great fun. I cooked like I haven’t cooked in years: Cousin Carolyn’s mashed potatoes, candied sweet potatoes, pink stuff, pumpkin pie, green bean casserole and, of course, rolls. My dad came over and taught me to make his pecan pie and we roasted chickens and made gravy. My sister and her kids came over. It was fun. And dd was able to eat everything except the chicken.:-) At the end we watched Under the Rainbow. DH loves that movie and has wanted me to watch it for 20 years. We were finally able to get it on DVD from Amazon.

The whole time we were eating and watching the movie and playing, we never lost sight of the reason for the season: the birth of Christ. It was a good Christmas. I hope to have many more just like it!

Confessions of a Trash TV addict

It’s Christmas Eve Eve so a nice calming day of baking cookies and watching trash TV ala Bravo was high on my list.
I’m a trash TV addict. I blame MTv. Back when I was just a little older than my daughter is now I was instantly hooked to Real World and Beavis and Butthead. My trash TV addiction began. Today it includes all sorts of wonders from Gossip Girl to Real Housewives…except the Beverly Hills franchise. Those ladies and their lips scare me. I used to love this newscaster from LA. She had bad cosmetic surgery and went on the talk shows to talk about what the doctor had done to her. Her lips after the botched surgery look just like the lips the BH Real Housewives have on purpose. Ack!
I finished book five in The Karen Marie Moning Highlander series. It’s the only one I haven’t loved. The story was awesome, but it seemed like she threw in a bunch of page filler sex. I’m listening to book 6 now. It’s tons hotter than book 5, but it’s better. The emotion is back. I love Moning’s story-telling. It’s funny because years ago my friends were reading these books and I wasn’t interested. My tastes have changed, I guess. This weekend I finished one of the best books I’ve read all year: Curtiss Ann Matlock’s Little Town, Great Big Life. It was amazing. I laughed, I cried, I felt every single page of that book. I’ve always loved Matlock’s work, but I haven’t read her in a while.
DD told me today that she read every one of my blog posts about her yesterday. (waving hi if you’re reading today!) I love my blog. I love going back and reading past thoughts, feelings, actions. I never thought this blog would serve as my journal. I try to stay away from deeply personal stuff here, the closest I’ve come to that is posts about addiction.
When I started writing here, or actually on Livejournal, I planned on having a space to write about writing. My life has changed a lot since I started this. I remember one of my early posts was a rant against women who made us believe we could have it all–a career, family and life. Today I’m not a bit bothered by that. In fact, as part of the college ministry I tell young women that that’s a lie but that they can have a fulfilled life as long as they put God first, family second and then the job.
That’s a show they ought to have on TV. I mean, they have Teen Moms, they should have middle aged women come to terms with the reality that the truth is quite simple, it’s something their grandmothers probably taught them, something they chose to ignore, something that will give peace in a way nothing else can.
I fought that plan for so many years, and my poor family paid the price.
My head’s on straight now. 🙂 And I enjoy my trash TV. It’s fluff fiction but lots of fun!
I wonder when New Jersey or New York Housewives will be back on?

Odell Newton Vanderburg, you were an amazing Grandpa. I Love You!

Saturday I held his hand and hummed and told him stories and about how all my kids know about The Big Fat Man and how my friends say my wedding is one of their favorite memories because he cried when he performed the ceremony. I told him it was okay to go, that we loved him and he’d touched our lives in ways he could never imagine. I told him it was okay to go to Grandma. He never opened his eyes, but the Hospice nurse told us he could hear. I tried not to cry, but when she sang Amazing Grace, it looked so much like he wanted to join in, I lost it a little. The nurse told us Saturday he had one foot here and one foot in heaven and we just had to let him go in his own time. When I kissed him and said goodbye, we knew it would be over soon. A few minutes after we walked in our front door, my uncle called to tell us it was over, that he was gone.
My earliest memories are filled with Grandma and Grandpa. I remember him telling me peanuts were goobers (I thought he was cussing, which is really funny now), and playing tickle monster and sneaking kisses from Grandma and telling us to shush up when the cousins were talking and he was preaching, and driving through town and telling us stories, and picking up the phone and dialing zero just to tell the operator Jesus loved her, and tinkering with washers in his back yard, and raising Bantams and pigeons and taking us to The Blue River to swim. When I spent a week with them a handful of years ago, my car broke down and he took me to Joe Cooper in Shawnee. He’d never bought a car from them, but they all knew him. When we went to the bank, everyone said hello.
That was Grandpa. He never met a stranger and he wanted the world to know Jesus. A year ago Christmas it broke my heart that he couldn’t remember his love story, a story he’d shared so many times over the years. When Grandma died in March, it broke my heart because he kept asking for her, wondering where she was, why she wasn’t there with him.
Last week he told my mom he knew where Grandma was now. Within five days, he was almost ready to join her.
Today we celebrated the amazing life of Odell Newton Vanderburg (June 26, 1917-Dec. 18, 2010) in the church where I spent most summers and Christmases growing up. I didn’t cry until we were almost home and then it hit me that it really was over. That Grandma and Grandpa and that part of my life are truly memories. That I can’t pick up the phone and call for advice or a recipe or prayer. But even though its over, it’s not. Grandma and Grandpa will live forever int heir legacy of God and faith and love.
I’ll miss them, but I’ll see them again one day. They’re together now, and that’s a good thing.

Way back when I was a young mom trying to get my darling daughter to wear something to school other than purple and green Little Mermaid pants and a big blue (very expensive!) shirt with a dog applique complete with eyelashes you could feel, I knew she was going to march to a slightly different beat from her friends.
She did. Now years later, she still does.
For as long as I can remember she and her dad have watched and loved Star Wars. She was Darth Vader one Halloween.
Being your own person isn’t always easy, Katie, but it sure is nice when you’re older to look in the mirror and say “Hi me. I like you.” 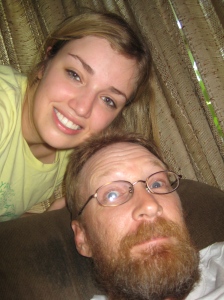 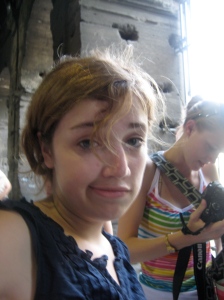 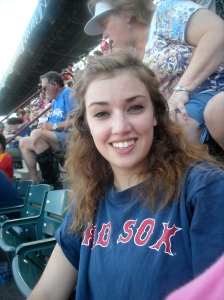 Dear Katie’s mom,
You are a rock star! Thanks for sharing and thanks for helping kids everywhere learn to say “I like me!”